\(k\)-Nearest Neighbor (\(k\)-NN) is a basic classification and regression method.

What questions is \(k\)-NN gonna solve? 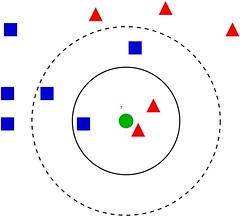 Basic idea described in wiki: In \(k\)-NN classification, an object is classified by a plurality vote of its neighbors, with the object being assigned to the class most common among its \(k\) nearest neighbors (\(k\) is a positive integer, typically small).

When tested with a new example, it looks through the whole training dataset to find \(k\) training examples that are closest to the new example. \(k\) is therefore just the number of neighbors “voting” on the test example’s class.

The commonly used decision rule is majority voting, which is equivalent to minimizer of emperical risk function.

*linear scan**: The most straightforward way to determine the \(k\)-NN classifer is linear scan which numerates all possible combinations (\(C_n^k\)) in the training instances and calculate the distances. Therefore, linear scan is very time-consuming for the large training data set.